With a $75,000 grant from the National Sea Grant Program, the team hoped to determine what conditions – such as geology and variability of soil properties at different water depths – caused some AOC mooring systems to fail and some to endure the 2020 storms. AOC is when oysters are grown in floating cages or in bottom-placed cages attached to anchors. This method allows the cages to be raised and lowered to protect oysters from predators, fouling and ideally the effects of hazards like hurricanes. 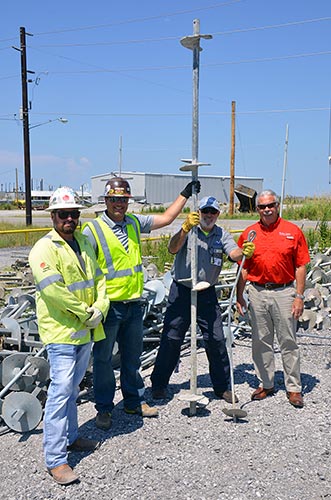 The research team of Navid Jafari, assistant professor of civil and environmental engineering at LSU; Brian Callam, director of the Louisiana Sea Grant (LSG) Oyster Lab and Voisin Oyster Hatchery on Grand Isle; and Rusty Gaude, LSG and LSU AgCenter Marine Extension agent, met with many Grand Isle oyster growers to learn about the mooring systems used and how they were installed before October 2020’s Hurricane Zeta struck. However, what survived the earlier storms and Zeta did not survive Hurricane Ida in 2021.

AOC operators were knocked-back to square one with their businesses. And the research team – which had hoped to provide growers with mooring solutions by the beginning of the 2022 hurricane season – had no insights to share.

As luck would have it, Gaude was able to find an opportunity in the catastrophe. Entergy Louisiana was upgrading its transmission structures from Leeville to Grand Isle and removing the industrial-strength anchors that helped keep those structures in place. Those old anchors were no longer needed. And when Gaude learned of their existence, he asked Entergy to donate them for an AOC pilot project. With the cooperation of MG Dyess, a contractor for Entergy, the anchors were moved to a storage location on the island.

“As a company, we’re only as strong as the communities we serve,” said Phillip May, Entergy Louisiana president and CEO. “And environmental sustainability is a crucial factor in helping our communities thrive. When the opportunity presented itself to help AOC operations, it was an easy decision to make, and we were proud to partner with LSU on this endeavor.”

The moorings typically used by AOC operators on Grand Isle are about four feet in height, said Gaude. “Two men standing in the water could screw them into the water bottom. The donated Entergy anchors are much bigger and more robust. Although they have to be installed with hydraulic equipment operated from a barge, these experimental anchors should provide many times the degree of security.

“We all know there’s additional expense to this type of installation. But what we hope the project will demonstrate is this type of mooring system will survive the meanest of hurricanes, so AOC businesses won’t be completely wiped-out when a storm hits. The objective is to make these oyster growers more resilient and storm resistant and keep their infrastructure from becoming marine debris and a navigation hazard,” Gaude added.

The anchors donated by Entergy – which cost about $183 each – will be installed soon at the two AOC parks operated by the Grand Isle Port Commission. This pilot project is to see how they fare throughout the 2022 hurricane season. Research results, which have application throughout the northern Gulf of Mexico, hopefully will provide AOC operators with rock-solid mooring recommendations by the start of the 2023 hurricane season.

“Building a more resilient Louisiana requires all of us to do our part,” said May. “Just as Entergy is upgrading its infrastructure to better withstand more frequent and more powerful storms, our partners at LSU are doing the same for our coast.”